Posted at 03:38h in Uncategorized by matthew.laird 0 Comments
5 Likes

The first post COVID budget has been released and while the numbers are slightly better than what was previously expected, it wasn’t a budget where the reins were pulled. Given the spending, Labor must be wondering what to do with themselves. On a surface level, the LNP are seemingly occupying more of what is often marketed as Labor’s bigger spending space. Where this leaves Labor ideologically, as the LNP projects budget deficits for years with net debt pushing $1 trillion dollars, who knows?

With an early election supposedly coming up off the back off this budget, there is plenty of space if Labor want to rebrand themselves as fiscal conservatives! 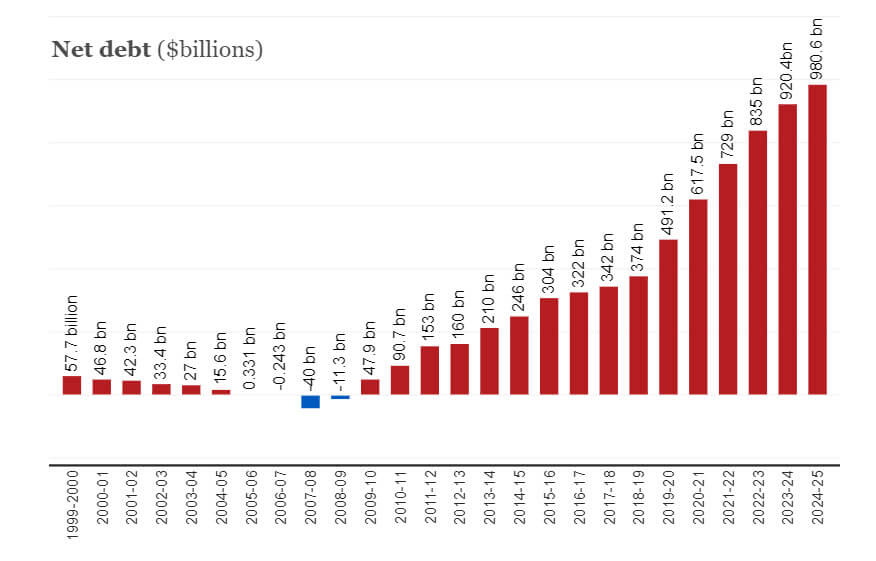 The idea of all the debt is to help grow our way out of the problem. This will be the sport to watch. Some commentators are suggesting it is not targeted in the right places, so growth isn’t likely to be strong.

Keen eyes will note that will amount to a pay cut in real terms.

Others are worried about a breakout in inflation. Veteran business journalist Robert Gottliebsen who has been speaking to all and sundry in the business community, suggests that businesses he’s speaking to are being forced to rase wages sharply to secure employees. He offers this warning:

“If you believe Treasury and the Reserve Bank then there is no need to lock in rates on borrowing. But if I am right interest rates will rise in 2022 so its urgent that highly indebted households borrow for as long a period as they can arrange at a fixed rate. The same applies to companies.”

On to the relevant points of note from the budget.

While the tax cut is being promoted by the Government and many in the media who are asleep at the wheel, don’t fall for it. There are no tax cuts. The Low and Middle-Income Tax Offset (LMITO) is only being maintained at the current level. It was due to expire and increase taxes. A big change on the share schemes, Australia was the only jurisdiction in the world where an employee was taxed on company shares granted as an income package the moment the employee left the company. This meant someone often owed tax on something they hadn’t yet received a benefit from.

Downsizing: Australians aged 60 and over will be eligible to make post-tax contributions of up $300,000 into superannuation per person when they sell their homes. Previously eligibility was age 65 and over.

Work Test: The work test will no longer apply to those aged 67-74 when making non-concessional or salary sacrificed contributions to superannuation. This age group are now also able to access the non-concessional bring forward arrangement, subject to eligibility.

Minimum Income Threshold: Previously there was a $450 monthly minimum income threshold before the Superannuation Guarantee was paid by their employer, this has been abolished. This means those earning under $450 a month will now receive superannuation from their employer.

Pension Loan Scheme Lump Sums (PLS): The PLS is a reverse mortgage type loan offered by the Government and designed to assist older Australians to increase retirement income via the equity in their Australian property. Users of the scheme could receive fortnightly payments accrued as a debt against their property. Now there will be the option of two lump sums of up to 50% of the Age Pension in a 12-month period.

As a response to the Royal Commission into Aged Care the government has announced $17.7 billion in funding for the aged care space.

Of note, an additional 80,000 Home Care Packages over two years. Extra funding to ensure compliance and a star rating to allow Aged Care recipients and their families to compare providers on performance, quality, and safety. Funding for informal carers. A $10 daily supplement for aged care residents for care and nutrition. And further measures to increase the size and skills base of the age care workforce.

Hopefully this will go someway to increase dignity and choice in the aged care space.

New Home Guarantee: The Government is providing a further 10,000 places under the New Home Guarantee. This is for first home buyers either building a new home or purchase a newly built home with a deposit as low as 5%.

Family Home Guarantee for single parents: This is for single parents regardless of whether they have previously owned a home or not. From 1 July 2021, 10,000 guarantees will be made available over four years to eligible single parents with a deposit of as little as 2%, the government will guarantee the difference up to 18%. There are property price caps depending on location.

First Home Super Saver Scheme: Introduced in the 2017/18, this scheme allows people to save money for their first home inside their super. The Government will increase the maximum amount of voluntary contributions that can be released under this scheme from $30,000 to $50,000.

Australia has housing affordability challenges in various locations around the country and the reaction to COVID has essentially exported unaffordability far and wide as many people departed cities. The incentives for new housing are good, but buy side incentives like 2% down government backed mortgages do nothing to alleviate the problem and they are likely an accident waiting to happen with rates at record lows. The Super Home Saver Scheme is being reported in the media as first home buyers being able to take $50k from their super, which isn’t exactly correct, it is from voluntary contributions.

Temporary full expensing: The temporary investment tax incentive has been extended 12 months until 30 June 2023. Business now has additional time to utilise the incentive. Businesses with a turnover up to $5 billion will be able to deduct the full cost of eligible assets purchased for their business, including the cost of improvements to existing assets.

ATO Dispute Mediation: A new umpire will also be introduced to mediate in disputes over debt between the Australian Taxation Office and businesses with a turnover of less than $10m.

As always, to ensure to you make the most of your money, we can offer advice on how to best apply it to your circumstances.