Posted at 22:30h in Uncategorized by matthew.laird 0 Comments
0 Likes 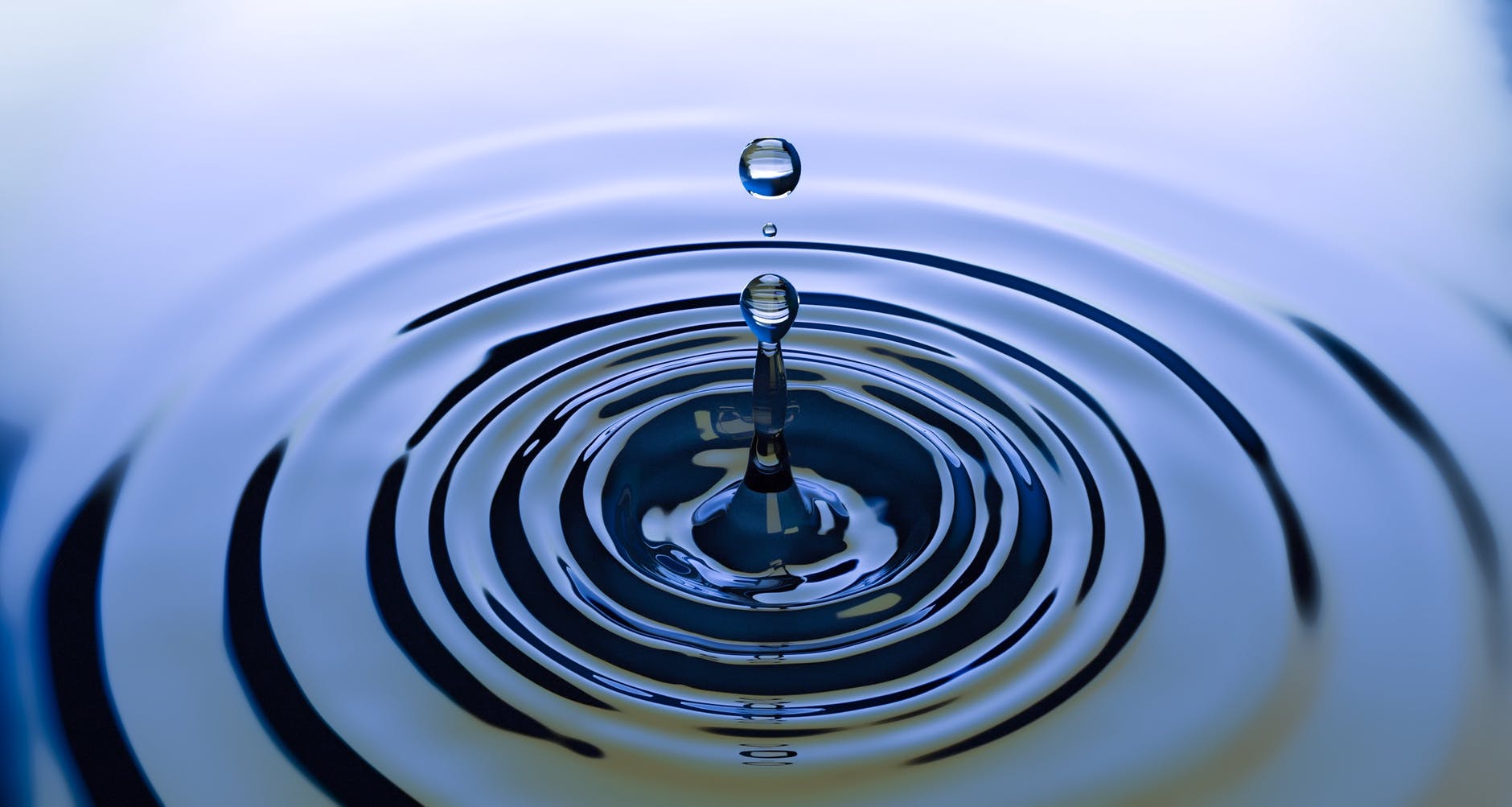 When the market falls 7% in a day. There’s no sugar coating it. It’s very painful.

We’ve been through this many times before. Our experience tells us to do nothing. With every previous market fall there has been a recovery. Every financial adviser has a story. It’s the person who panicked. There was an event. There was a large market reaction and a client demanded to exit their portfolio and sit in cash. These clients never get back in. They sit in cash as the market recovers.  Then it pushes higher. Too proud they refuse to reenter. Often they descend into conspiracy. Clutching for the next ‘event’ that will send markets further down.

Days like this will lead every news bulletin. They will be plastered on every front page. It’s to be expected. Unlike most other falls, one this size is genuine news. However, there’s nothing for any investor to gain by rehashing it. Our advice would be turn it off. It will be spun into ‘the end of days’ and it will be cheap entertainment.

For anyone holding more fixed interest than shares in their portfolio, it’s slightly more benign. This has likely affected you much less than what you’re seeing in the media.

The bad news? No one knows anything. Nor how long this may drag on for. A cure could come tomorrow. The response to that could be a swift turn around. Those who panic and exited the market for safety will pay a price. It happened in 2009. After the dust settled a recovery was swift.

Investing is relatively simple – if we do nothing. The hard part is doing nothing. Instead of focusing on market movements it’s best instead to reflect on our financial plan and reflect on our goals. While days like this aren’t welcome, our portfolios are built in support of our goals. In line with the level of risk we were willing to take pursuing them.

Those goals and plans aren’t likely to change. With that in mind, an exit to cash, which offers almost no return, cannot and will not support goals over the long term.

Here’s a history lesson on why doing nothing is preferable to acting.

In the last decade one of the most brutal and unrelenting sell offs came in 2011. On March 11 a magnitude 9.0 earthquake occurred off the pacific coast of Japan. The earthquake was quickly followed by a Tsunami and a Nuclear power plant melt down. No one knew what any of this meant. Shares sold off and kept selling off.

Later in the year the US lost its AAA credit rating from S&P. Two major events in the space of six months. While there were brief upswings along the way, from 11 April 2011 until 4 October, the ASX All Ordinaries fell 22% without accounting for dividends.

How did things look on a monthly basis in 2011? There was a lot of red in sharemarkets while fixed interest acted as a stabiliser. 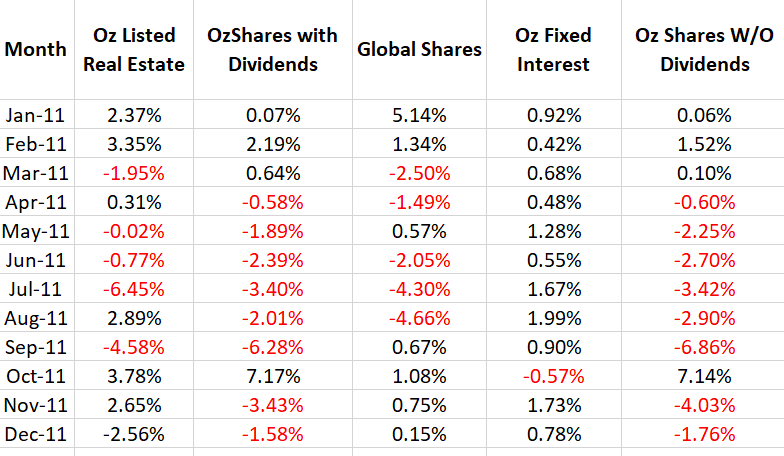 But what happened after 2011? As is often the case, the recovery followed. There were double digit gains. 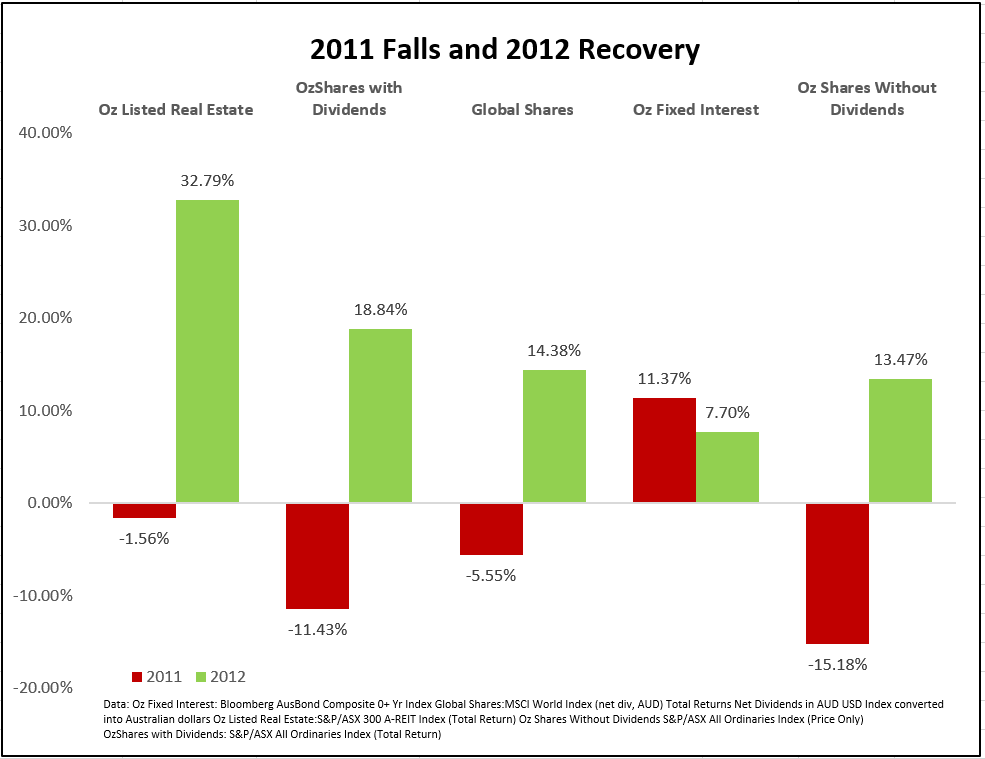 Over that two year period, 2012’s recovery offset the continuous falls of 2011.

We don’t know how long we might have to endure the current falls, but it’s important to remember there is always a recovery. As strange as it sounds the sharemarket is likely becoming less risky, not more. Expected returns go higher when markets go lower. This is why it is important to avoid making any rash changes. The virus will eventually have a cure. The situation in the oil market will stabilise. Governments will act to stimulate their economies. Action will be taken. Countries will return to normal.

All of these things combined will ensure the recovery starts and advances. There will be hiccups, but it’s important not to be on the sidelines when a recovery begins. Remember, a recovery only becomes a recovery in hindsight – when the market is substantially higher. You won’t know it when you see it, but a year later it will be obvious.

Our experience has shown it’s impossible to accurately time such movements. The reason why it’s best to stay the course.

This represents general information only. Before making any financial or investment decisions, we recommend you consult a financial planner to take into account your personal investment objectives, financial situation and individual needs.