What You Can Learn From The Donald

06 Nov What You Can Learn From The Donald

Posted at 08:17h in Uncategorized by matthew.laird 0 Comments
0 Likes

November 4 2016, four days BD (Before Donald). The ASX had wormed its way down to 5263 and the Dow Jones was at 17,888. Market timers had driven both indices down, selling their own assets and their clients’, so they could sit in cash and safely ride out any uncertainty.

A day earlier in the Australian Financial Review, Tim Samway, managing director of Hyperion Asset Management, confirmed the uncertainty was causing investors to move to cash. Sounds like a good idea, right? A noted publication reported an important sounding person saying investors were moving to cash, why wouldn’t you follow?

This is the way markets work. Gains often come in short spaces of time. You sit out a few weeks thinking an orange billionaire will make the world a scary place and suddenly you’ve forgone a freely available 5-6% increase in equities. 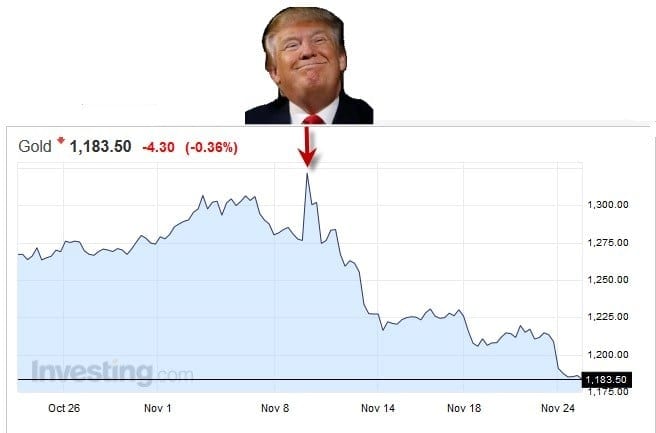 After a brief spike, in US Dollar terms gold has lost 11% since Trump was elected. The loss in Australian dollars was around half that due to the increase in the US dollar. If you want to know if anyone would have actually sold shares and jumped into gold, one investment newsletter advised readers of a “Trump Trade” where they sell their shares and pile into gold. For the past few weeks they’ve been making excuses as to why it didn’t happen.

Back to that noted publication, the Australian Financial Review. On November 2, Trevor Sykes wrote a column titled “Safe Havens in an Unsafe World”. After listing numerous financial and political boogeymen (including Trump) around the world, Sykes suggested investors find solace in gold:

“The classic refuge in any money panic is gold, which can be either held physically or by buying shares in gold mining companies…. if you’re seeking insurance against a financial Gotterdammerung, putting a few per cent of your portfolio into yellow bars or gold equities should help you sleep better at nights.”

Columnists like Mr Sykes have space to fill. Inevitably they’ll cycle through a list of varying investments every few months to keep things interesting. Or on cue, when things are looking uncertain, they’ll bring up gold and toss in terms like “safe haven”.

Never listen to anyone who cheerleads holding precious metals as some sort of safety measure. Gold has been a losing deal for years. Gold pays no interest or dividends and it’s no less volatile than any other asset class.

Especially don’t listen to anyone telling you to hold the physical version because they claim you’ll need to trade it for food when society breaks down. First, Armageddon isn’t happening. Second, If the world descended into Mad Max territory there’s no logic in hauling around or protecting heavy bricks that maniacs would want to steal.

Finally, (and we’ll keep saying it) anyone who thinks they can forecast market movements is a fool. You’ll see advisers and fund managers quoted in the media from time to time talking about how they’re sitting on cash. Convinced of their own genius some of them sit out bull markets. The losers are their clients. Just because these strategies are printed in the media doesn’t mean they have any authority. No one knows when the best or worst days will occur. Staying invested is the only approach that works.

For all Trump’s faults, he’s just reminded us of some big investment lessons and many investors learnt the hard way.

This represents general information only. Before making any financial or investment decisions, we recommend you consult a financial planner to take into account your personal investment objectives, financial situation and individual needs